For the first time in 16 years, growth in the Church has prompted the creation of a new stake in the Calgary, Alberta area. Several other stakes of the former six in Calgary gave a hand through boundary adjustments with wards changing stakes, stakes sharing buildings and stakes being given new names to better recognize the areas they cover. 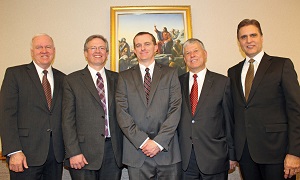 Calgary’s newest and seventh stake is known as Calgary Alberta Bow River Stake and is the 48th stake for Canada.  On Sunday, December 6, the new stake gained its first President in Kevin C. Thompson, a Calgary financial controller, married to Tracey Olsen Thompson and father of four children.

President Thompson chose Troy R. Wood as his First Counselor and Jerome J. Wigg as his Second Counselor for his stake in the city’s south. The new stake will share a building on Parkland Boulevard SE with the renamed Calgary South Stake, that now goes by the title of Calgary Alberta Fish Creek Stake.

The announcement of the new stake and other changes came during a regional broadcast of the Sunday session of the Calgary South Stake conference. As well as a full Parkland stake centre, the broadcast was sent via video transmission to 10 other church buildings.

Earlier Elder Spackman spent several minutes going through the changes and stake creation that saw some stakes lose up to four wards, but gain one back in the process. For the first time, some stakes share the same building as growth continues to boost Calgary which now has about 22,000 members.

“This is an exciting day and it’s wonderful to see the Church grow in Calgary,” Elder Spackman said after the changes were sustained by the membership. “The gospel of Jesus Christ provides the hope and peace we need in these times of global uncertainty.”

For his part, the new Calgary Bow River Stake President Thompson said he was “humbled at this responsibility and look forward to serving with the people of this new stake.”

The seven stakes now in Calgary and outlying areas of Airdrie to the north and Okotoks to the south and the changes are:

The Church has been in Alberta since 1887 and created its first stake – known as the Alberta Stake – back in 1895. There are now about 480 separate congregations and a membership across Canada of approximately 193,000.

Elder Andersen told the Regional Broadcast audience the “fairly complex reorganization of the Calgary area stakes was inspired by the Lord” as the area moves forward. And in a pointed reminder he talked of “the power of this Church. The genius doesn’t come from the right choices of its leaders but from the sustaining hearts of its members.” He repeated that the changes made and new callings received “are from God, I have felt it. Embrace these changes and new leaders with all of your hearts,” he added.