“Ministering to Our Father’s Children” is a series of articles compiling selected journal excerpts of Brother Christensen, who has travelled to many parts of the world providing charitable service to the poorest of our Heavenly Father's children, many living under the most severe of conditions. Experiences he describes [without editing] have been organized into collections that demonstrate Christ-like attributes or qualities shown by these wonderful people.

Wherefore, if a man have faith he must needs have hope; for without faith there cannot be any hope. Moroni 7:42

Wherefore, whoso believeth in God might with surety hope for a better world, yea, even a place at the right hand of God, which hope cometh of faith, maketh an anchor to the souls of men, which would make them sure and steadfast, always abounding in good works, being led to glorify God. Ether 12:4

Over the past eight years I have travelled the world, seeking out children who have been orphaned by disaster, disease, violence or poverty. This endeavour has taken me to Haiti, the Philippines, Guyana, Japan and many parts of Africa.

Although born and raised in Canada, I have felt a need to help my young brothers and sisters wherever they might be. I have sought out those who could not help themselves and provided the blessings my Father has given me with the charge to, 'Feed my sheep'. These accounts are some of the many wonderful experiences I had through this work in Africa.

Many of the areas I have travelled have not been 'safe'. I would often find myself in the most desperate slums, remote regions or areas of civil unrest. Although I had been advised to avoid these areas I knew that the need would be greatest there and that nobody else would venture therein. I never feared for my safety as I knew I was on the Lord's errand and that He would care for me when things got difficult. This protection is conveyed by our Heavenly Father through the words in Isaiah where he tells us, “Fear thou not; for I am with thee: be not dismayed; for I am thy God: I will strengthen thee; yea I will help thee; yea I will uphold thee with the right hand of my righteousness' Isaiah 41:10 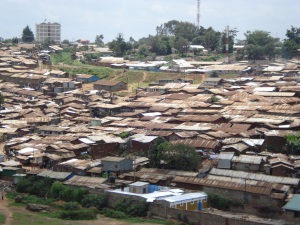 I have found that the people of Africa have tremendous faith. This strength comes from their complete dependence on the Lord for their survival. The depth of their humility
knows no bounds and their comfort comes in the knowledge that God loves them and will help them endure their struggles. They wait upon the Lord in all they do.

Journal Entry: WE EAT TOGETHER OR WE HUNGER TOGETHER

Today I was in the slums of Nairobi having heard of another orphanage in need. As I entered the small enclosure it was abundantly clear that these children were struggling. I first met with the man who, along with wife, cares for the 48 children in the centre. Their home is a small room within the cluster.  He was occupied, at the moment, giving medication to an infant of two years old who is struggling with aids. After a brief discussion I asked to be shown the various rooms. The boy’s room held 28 boys in bunk beds with four boys per bed. Although things were neat there wasn’t much room to walk around the beds. The girl’s room showed the same plight. I then asked to see the storeroom where the food was kept. As he unlocked a third door I could see that the room was completely empty. Where is the food I asked? “We have none” came the simple reply. What will you do for dinner, I innocently asked? By the grace of God, we shall eat today. I stated that I appreciated his faith but what if the food does not arrive before dinner time? He meekly replied “Then we go hungry until food comes”.

Such faith and dependence upon God is common among these beautiful people. We ensured that there would be food that night and put things in motion to help lift them out of this daily struggle.

Journal Entry: THIS PLACE IS TOO DANGEROUS

On our first trip to Kenya, we arrived in the city of Nairobi. We were being toured around the city by the former Foreign Minister. I asked to go and visit Kibera which is the largest slum in east Africa with over 1,300,000 people living there. We were told that it was far too dangerous to go there and that he wouldn’t even go there and he was from Nairobi. I repeated the request and he agreed that he would drive us around the perimeter but he would not stop the car and we must keep our windows up and our doors locked.  I didn’t see much point in driving around without going in but he was quite insistent. At the end of our day he returned us to our hotel. The next morning, I went to the desk clerk and explained that I wanted to go to Kibera. The clerk shook his head and informed me that it was far too dangerous to go there and that white people never go into that slum. Frustrated at my inability to get to the slum I went to the street and hailed a cab. I instructed him that I wanted to go to Kibera. He leaned over, looked up at me and said,” White man no go to Kibera”. Annoyed, I asked him which way it was and he pointed over his shoulder. As he drove off I determined that I would walk there and I headed off.

It took me about two hours to reach the slum and I must admit I was a bit concerned but I knew it was where we were needed so in I went. What I saw was very disheartening. The people were living in no more than shanties. Scraps of sheet metal patched together to form walls and a roof of sorts. There were children everywhere, poorly dressed and obviously not in school. With no sanitation services and there was garbage wherever you looked with great numbers of people having nothing to do. 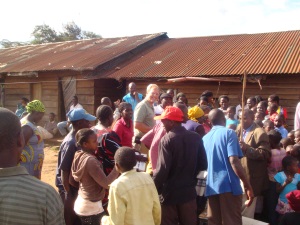 After a while I started talking to people trying to understand their situation. As I approached one man he explained that he was a minister and he invited me into his church which was no more than a tin shack with one room for his bed and the other for preaching. There were four ladies sitting on a bench and I asked what they were doing. He explained that they were praying in the hope that someone would hire them for the day so they could buy food for their family. I had truly found the poorest of the poor. Here we would work and now we sustain 12 orphanages in Kibera.